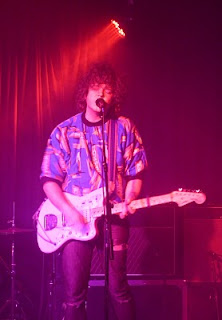 Ringo Deathstarr have a lot to answer for.
For a start, I’m covered in beer. Their beer, to be precise… and then there’s the small matter of the tremolo-induced tinnitus which seems to effect me the for best part of the morning after their raucous, head-splitting set at Islington’s Lexington Club.

The band themselves appear to be having a better time of it. The release this week of their much-anticipated long-player ‘Colour Trip’ on Club AC30 has met with largely positive reviews. They’ve enjoyed international exposure with an interview and airplay on BBC6 Music and they’ve played sets to audiences throughout the UK supporting The Wedding Present. All in all, it’s been a positive few months for the Texan three-piece.

As an album, Colour Trip is littered with furious three-minute sorties into punk, shoegaze and power-pop. Influences aren’t masked, they’re celebrated. And whilst they may be treading a well-worn path, at least they’ve got the decency to make a good fist of it.

Highlights include the sumptuous Kaleidoscope – a pounding, lo-fi love song that dares to smuggle in a stadium-worthy guitar riff amidst a cloak of reverb – the album closer, Other Things and the single, So High. The latter sounding like it was lifted straight from the Pure-era Primitives songbook. But whilst the influences are obvious (My Bloody Valentine & The Jesus & Mary Chain to name but two) Colour Trip is so much more than paint-by numbers karaoke-gaze™. It’s an assured record; confident, compelling and, perhaps crucially, offers a new generation a direct reference point for artists they may otherwise never discover.

Whilst the album revels in some polished production, as a live act Ringo Deathstarr are a very different animal. There’s a raw feel to their set – more energy than luxury – and the band punch their way through a frantic set that inevitably showcases tracks from Colour Trip amidst a peppering of established favourites; the highlight being a mesmerising cameo of Summertime.

But long after the lights have gone off and the ears have stopped ringing, it’s the frenetic finale that the assembled will remember the longest. A riotous encore results in a bloodied head for Frazier as he charges Gehring into the speaker stack, the audience are sprayed with warm beer (that’ll be me then) and one bewildered onlooker gets handed the lead guitar. Joyously, by this point there’s so much distortion coming through the PA that he can, and does, play absolutely anything... and it still sounds great.

Colour Trip is available through Club AC30 or through the sinister wizardry of internet downloads.