The Lost Rivers - Death of Eve 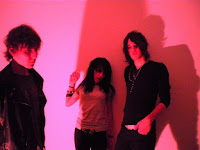 The Lost Rivers are one of a clutch of promising artists signed to Northern Star records, a UK label just 6 years young, but already with a roster of high repute.

Hailing from the German province of Baden-Württemberg, the three-piece have a sound befitting of their industrial homeland. A melee of abrasive guitar, rattling snares and rumbling bass hooks combine to fuse the type of incendiary agit-gaze last seen by A Place to Bury Strangers.

With one 7-track EP to their name (2010's My Beatific Vision) all eyes will be on 26th March and the much-anticipated release of the band's debut full-length album Sin & Lostness.

Before then, British fans can sneak an airing of new material when the band head to London as part of Northern Star's Revolution in Sound weekender. On 24th March, Brixton Windmill hosts an impressive line-up including 93MillionMilesFromTheSun, The Electric Mainline and indie crowd-pleasers, The Domino State.