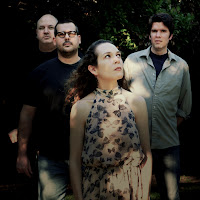 One of this year's most hotly anticipated releases was the debut EP of Texan four-piece, Drowner. Melding influences as diverse as REM, The Cure and My Bloody Valentine, their eponymous CD is a sparkling journey through the very best in contemporary shoegaze and dream pop.

Led by Darren Emanuel (Swimming In, Apples To Earth) and spearheaded by the opulent vocals of Anna Bouchard, Drowner are yet another feather in the cap for the remarkable US independent, Saint Marie Records - a label that boasts a roster including Sway, Trespassers William and The Sunshine Factory.

Drowner is an record spanning vast sonic spectrums. From the lazy calm of Never Gonna Go Away to the euphoric Here (featured below), you sense it's a genuine labour of love... so it comes as little surprise that Emmanuel took three years between the recording of early demos to the recruitment of final members, Sean Evans (guitar) and Mike Brewer (bass).

But it's a patient approach that paid off. Indeed, as the first bars of EP-opener, Point Dume, ring in, it's clear we're looking at something a little bit special... It's an immediate rush; a hit of neo-Cocteau's bliss-pop and a soaring statement of intent; buffered only by the emergence of edgier tracks, such as the near-gothic Chime.

Immaculately produced and intelligently written, this is a record of genuine craft - and never more so than when consumed by the FX-laden ambience of Emmanuel's patchwork guitars. The lucid dreamtime of Tiny Ship explodes into a dizzying pedal-charged roar, and the glorious This threatens to literally burst with joy.

Drowner concludes with the addition of some not unwelcome remixes. Emmanuel's own Apple's To Earth add breaks and funk to a reworking of Chime, and Nikki Gunz slaps a dubstep imprint over Never Go Away.

Drowner is out now on Saint Marie Records. To discover more about the band, visit their official website here or stream music via Bandcamp and Facebook.