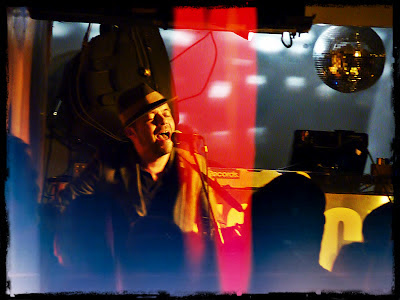 Following a screening of Anyone Can Play Guitar - Jon Spira's touching and often humorous documentary chronicling the rise of the Oxford music scene - one of the city's favourite sons, Mark Gardener, took to the stage on Tuesday to perform highlights from a remarkable back catalogue.

Sporting a look that borrowed more from 1930s organised crime than the shoegaze counterculture of yore, the former Ride front-man condensed a career-spanning set into 30 minutes of acoustic indulgence.

Taking time out from current project, Hush Delirium, Gardener was in reflective mood, performing tracks from his 2005 solo album These Beautiful Ghosts, as well as favourites from Nowhere and Carnival of Light. But the highlight of the evening came as Gardener acknowledged the anniversary of 1992's hugely influential Going Blank Again. Now into its 20th year of release, the album marked Ride's commercial (though not universally, critical) zenith, peaking at number 5 in the UK album charts.