Daniel Land & The Modern Painters - The Space Between Us 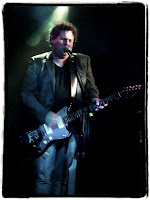 Set for release on May 28th, The Space Between Us is the second full-length studio album from Manchester's Daniel Land & The Modern Painters. Recorded in the inspirational setting of a 500 year-old rural cottage, the album captures Land in confessional mood, reflecting on loves lost and friendships won.

Lyrically,  The Space Between Us is a deeply personal affair, yet musically this is the Modern Painters' most collaborative work to date. The instrumentation is elaborate: mandolins, accordians and even harpsichords (not, one assumes, sourced locally in Chorlton-cum-Hardy) jostle for place amidst the swathes of guitar and lush FX. It's an adventurous project, but one that retains the spellbinding songcraft that characterised 2009's debut, Love Songs For The Chemical Generation.

Album opener Echo & Narcissus will be familiar to many. A live favourite that first appeared on 2011's web-only compiliation, Album in a Day Vol.2; this is Land at his absorbing best: delicate, uplifting and heartbreaking in equal measure.

On Lovelife Land showcases a new-found self-confidence in his vocals. Ambitious vibratos flicker over acoustic guitars and the gulping ethnic rhythm of tablas. Indeed, throughout The Space Between Us, Land's voice (so often found buried in the mix) is used more boldly than in previous outings.

Elsewhere, the heart-stopping fragility of Cherry Bark & Almonds and the shimmering grace of The Hawk & The Nightingale are balanced by Sleeping With The Past; a stand-out moment of finely-crafted pop that simply begs for radio airplay.

The album closes with the sprawling epic, Starfish Fucking. Checking in at 13 minutes in length and boasting a title which is 50% profanity, you suspect this one's been written off as a single. Nonetheless, it's a suitably grand sign-off for a record which flirts equally between intimacy and elaborateness. Our featured track (below) is lead-single, Eyes Wide Shut, a glorious cut of synth-led guitar pop and a track to treasure from this wonderful return to form.

Sleeping with the Past is released on Club AC30 on May 28th. Pre-order here.