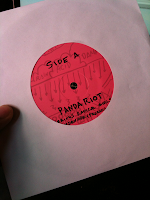 As if 2012 wasn't already exceeding its promise to be a wonderful musical year, June 5th sees the return of Panda Riot with a typically infectious slice of sunshine shoegaze. The Chicago-based quartet are set to release Serious Radical Girls on limited edition 7" (just 400 copies are being pressed) through Saint Marie Records.

Backed up by Golden Age Precursor and a sprawling SPC ECO remix of the title track; Serious Radical Girls presents Panda Riot's first new material since 2010's Far & Near EP - and boy do they deliver.

Bursting with the innocence of high school power-pop, Serious Radical Girls has a growling undertow of incendiary guitars and echoing piano loops; but it's the jubilant headrush of Rebecca Scott's vocals that make the sound so utterly charming.

It's a huge return to form, and one that bodes well with a long-awaited LP, Northern Automatic Music, scheduled for release later in the year.