Rancho Relaxo - Gandhi Is My Gun 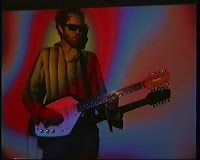 Rancho Relaxo are quite simply one of the most exciting guitar bands on the planet right now. Hailing from the Norwegian municipality of Fræna, the quartet of Inge Kjetil Sandvik (vocals, guitar), Martin Schram (bass), Khalil Olsen (drums) and Ole Kristian Malmedal (guitar,organ) are responsible for some of the finest psychedelic drone rock in recent years.

Originally released in January, Happy Friday Experiment is the latest in a series of sonic instalments that date back to 2007, and the band's debut long-player Look At The Wall. Since then the band has patiently evolved its sound, perfecting the 60s-infused space rock that defines it so markedly.

Whilst comparisons inevitably land within the radar of The Brian Jonestown Massacre, The Jesus & Mary Chain and Black Rebel Motorcycle Club, there's also something inherently singular about Rancho Relaxo. From the circular drawl of I Want You to the swirls of Crumer organ on Make You Mine; Happy Friday Experiment bursts into life with an all-pervading fog of guitars that act as a constant throughout the record.

Expect sounds akin to Spacemen 3 body-slamming The Byrds in the rasping Diamond Black and synth-led freak-outs such as the soaring, ethnic-fused album-closer Into The Night. Elsewhere, a pair of instrumental 'Intermissions' (Green and Blue), punctuate proceedings with technicolour melodies that add a genuine element of warmth.

Perhaps the pick of the bunch, though, is the extraordinary Gandhi Is My Gun. The myth that sitar psychedelia has to be twee bohemian bunkum is blown out of the water in this five-minute explosion of Eastern incantations and bulldozing guitar noise. It's a thrilling moment from a captivating album, and a band at their very peak.

Happy Friday Experiment is released via Trout as Lubrication Records. To explore more of Rancho Relaxo's music visit their pages at ReverbNation and Facebook.