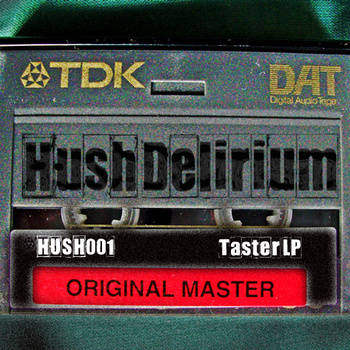 Art and music - those most promiscuous of bedfellows - are at it again; only this time the copulating couple are moaning just a little bit louder... And the sound's bloody well reverberating.

For this is free-love of a sonic nature. This is psychedelic, this is experimental, this is Hush Delirium.

The brainchild of abstract artist Simon Welford, Hush Delirium is a project harnessing music for artistic inspiration. Featuring (largely instrumental) submissions from the likes of Mark Gardener (Ride), Dean Garcia (SPC ECO, Curve) and Adam Franklin (Swervedriver), Welford intends to create visual works stimulated by the sounds at his disposal. With plans for international exhibitions and live performances, it's a bold project - and one not immune to setbacks. Only last week it was announced that November's inaugural event in Denmark would have to be postponed, frustrating contributors and enthusiasts alike.

But the first chapter in this yet-untold story was not to be denied a happy ending, for earlier today Hush Delirium unveiled a digital download showcasing some of the musical submissions Welford will be working with.

Boasting the understated brilliance of She (contributed by Chatham Rise), the stuttering drone of Her Vanished Grace's Cloud's 7 and a neo-garage piledriver from The Cult of Dom Keller (Ghost in My Head), this is a taster every bit as abstract as the work it's intended to inspire. It's an eclectic mix, demonstrable by the leap from sometime Stone Rose Aziz Ibrahim's ethnically-charged slide guitar (Heaven's Rain) to the programmed drums of A*Star's resonating Spider Chorus. Elswehere, Jaq Gallier provides a crackling bedrock and some sumptious dream pop on the delightful Wild is The Wind.

These are clearly early days for Hush Delirium, but already the signs are hugely exciting. With a potentially limitless pool of musicians and a visual element yet to be unleashed on the public, anticipation justifiably grows.

To get your free download of the Taster LP, or to purchase some teasing prints of Welford's artwork, head to Hush Delirium's Bandcamp page.