Lamppost Records - Under The Wildflowers Volume 1 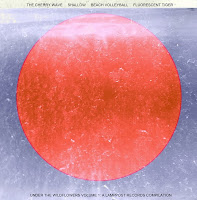 Glasgow-based Lamppost Records is one of a number of DIY labels with some genuinely exciting output at the moment. Their recent digital release, Under The Wildflowers Volume 1 showcases some of Scotland's (and beyond) fuzziest talent through a raucous four-track EP, bristling with energy and noise.

Featuring a quartet of highly-rated new acts, Under The Wildflowers kicks off with a contribution from The Cherry Wave; a fledgling Glasgow four-piece who already have the impressive Blush EP under their belts.

Under Dull Grey Skies is a three-minute barrage of pulversing noise-pop, reminiscent of early Sub-Pop scuzz, and the scruffier elements of post-punk shoegaze. It's an inspired opening and a breathless introduction to the label.

Next up is Shallow, whose sibilant psych-pop provides arguably the most accessible moment on the EP, through Alternative. Coming in at little over two minutes in length it's an encouraging snapshot and an all-too-brief teaser of the band's undoubted potential.

Elsewhere, London's Beach Volleyball contribute First Floor. Sounding like The National played through a hundred AC30s, First Floor is as brooding as it is bewitching. Brimming with reverb and pulsing with lo-fi percussion it's a timely introduction for a band whose debut album is released next week.

Lastly, Nothing but Blue Skies From Here On Out, Nothing but Blue Skies, may be the least marketable track of the Twitter era, but titles of monstrous drone behemoths don't tend to trend that often anyway. Penned by the remarkable Fluorescent Tiger, an Alabama native and purveyor of all things noise, Nothing But Blue Skies... is an astonishing symphonic maelstrom that complements past glories such as 2012's In The Evening EP and recent single The Loneliest Wolf.

To stream or download your copy of Under The Wildflowers Volume 1, head to Lamppost Records Bandcamp page.