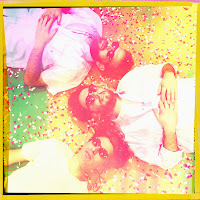 Having scored a wealth of positive feedback in their native Tel Aviv, Vaadat Charigim has announced plans to give debut album The World Is Well Lost a worldwide physical release. The Hebrew three-piece, whose name literally translates as 'Exceptions Committee', have inked a deal to launch the album on both cassette (Burger Records) and vinyl (Warm Ratio).

It's due recognition for a band whose output is sure to garner a broader international appeal.

Album opener Odisea (featured below) mirrors this theme as waves of crackling distortion crash over a subtle guitar hook to produce an absorbing taste of things to come.

Further highlights include uptempo slices of indie pop such as Ze Beseder Lefahed (the first single taken from the record) and Haolam Avad Mizman, whilst the percussive charge of Kezef Al Hamayim delivers pulsing breaks and stinging lead guitar.

The World Is Well Lost can be streamed in its entirety through Vaadat Charigim's YouTube page, whilst the band also host tracks on Soundcloud.